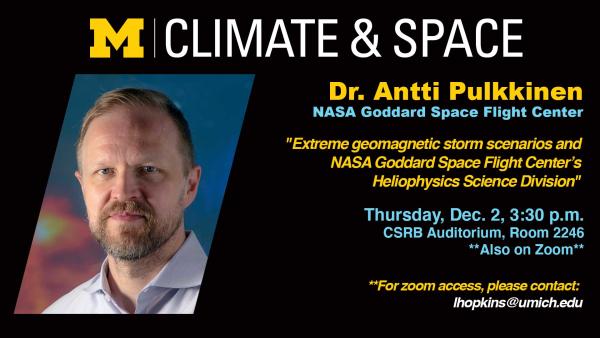 Dr. Antti Pulkkinen, Acting Director of the Heliophysics Science Division at NASA Goddard Space Flight Center will give a lecture as part of the CLASP Seminar Series. Please join us!

ABSTRACT:
In this talk, I will cover two somewhat separate but yet connected topics: i) extreme geomagnetic storms in the context of power grids, ii) introduction to NASA Goddard Space Flight Center’s Heliophysics Science Division. In the first piece, I will be wearing my research scientist hat and in the second, my Division Director hat.

Extreme geomagnetic storms pose a major threat to ground-based infrastructure and electric power transmission systems in particular. There has been a major recent focus on improving our understanding of extreme storms and allowing the new understanding to flow into detailed power engineering hazard assessments. Also the Federal Energy Regulatory Commission (FERC) has been involved and we have a framework in place that requires all U.S. utilities operating at or above 200 kV to carry out detailed hazard assessments. In the first part of the presentation, I will discuss the development of extreme geomagnetic storm scenarios for the power engineering hazard assessments. I will also briefly discuss my own role in the regulatory work.

The NASA Goddard Space Flight Center’s Heliophysics Science Division (HSD) vision is “To discover and innovate in heliophysics for the benefit of those on Earth and those exploring the solar system." HSD conducts research on the Sun, its extended solar-system environment (the heliosphere), and interactions of Earth, other planets, small bodies, and interstellar gas with the heliosphere. Division research also encompasses geospace -- Earth's uppermost atmosphere, the ionosphere, and the magnetosphere -- and the changing environmental conditions throughout the coupled heliosphere. Scientists in the HSD develop models, spacecraft missions and instruments, and systems to manage and disseminate heliophysical data. They interpret and evaluate data gathered from instruments, draw comparisons with computer simulations and theoretical models, and publish the results. In the second part of the presentation, I will introduce you to our Division and discuss how you can get involved with our work.

BIO:
Dr. Pulkkinen is currently Acting Director of the Heliophysics Science Division at NASA Goddard Space Flight Center. Dr. Pulkkinen received his Ph.D. in theoretical physics from the University of Helsinki, Finland in 2003. Subsequently he joined the nonlinear dynamics group at NASA Goddard Space Flight Center to carry out his postdoctoral research 2004-2006. Dr. Pulkkinen's Ph.D. and postdoctoral research involved studies on both ground effects of space weather and complex nonlinear dynamics of the magnetosphere-ionosphere system. 2011-2013 Dr. Pulkkinen worked as an Associate Director of Institute for Astrophysics and Computational Sciences and as an Associate Professor at The Catholic University of America (CUA). At CUA Dr. Pulkkinen launched a new Space Sciences and Space Weather program crafted to educate the next generation space weather scientists and operators. Dr Pulkkinen entered NASA civil service in 2013 to lead the Space Weather Research Center that provided heliophysics science and space weather services to NASA's robotic mission. 2017-2020 Dr Pulkkinen was the Deputy Director for the NASA GSFC Heliophysics Science Division.